Palace Skateboards, an extremely successful streetwear company with a limited edition and ever changing product line, is the kind of company that is always up for a new and unconventional approach to retail. They wanted to use their latest retail space to express their mantra of moving away from the expected. The design direction we pursued for their second retail store in the U.S. was ancient Roman juxtaposed with LA Punk! This new store in LA launched after their flagship U.S. store debuted in Soho with a “Versace 80’s” vibe.

Each of their retail locations has three distinct areas: entrance, gallery, and point of sale. In the LA store you enter first through the double doors under the pink awning with custom white fringe detail–an absolute must for one of the company’s partners. Using the door handles made from the letter ‘P’ in Palace, you step inside under the cover of a Roman-style temple. Six pillars support the structure, which reveals itself as a temple as you enter further into the gallery space of the store. On the right is a gallery wall to display Palace’s skateboards. Surrounding the rest of the space are racks to display the latest “drop” of garments. The garment displays are arched alcoves backed with mirrors that visually expand the space, bounce light through the store, and reinforce the Romanesque architecture. Clothing is displayed in the store to show colors and styles while the full inventory of the stock is organized in a backroom. This allows the clothing to be easily discovered and selected. We were determined to move away from the clutter of freestanding racks and the trendy “pop up” like stores. Two hand carved water features with faces as the fountains hang from the walls. Custom tile mosaics in a symmetrical layout are used on the flooring to help create sections within the large open space.

Transitioning from the gallery space to the point of sale area, the volume of the space expands as you are now under a recreation of the famous Pantheon Dome. Complete with oculus, although the opening at Palace is a skylight that brings in only light, not rain like the open oculus of the Pantheon.

The dome was molded and created in New York by Atta studios with strict seismic framing and allowances. The dome was shipped in thirteen 400 lb pieces to be hoisted into position below the skylight. At the center of the room is a 2,000 lb fountain meant to be in the shape of a sundial. The stone fountain contains a video projector. The carved stone cap is the perfect size to conceal the projector. A constant loop of Palaces award winning videos displays on the 13′ x 7′ curved seamless screen on the back wall of the store. For the LA store we introduced Palace to video mapping. which is the icing on the dome! The dome had to be perfectly modeled and installed for the mapping to be calibrated and display properly. Lighting, sound and HVAC were tucked above and behind moldings and a complete facade was built to remind all of the company’s British heritage.

The build process for this new store was a short two months. Within this accelerated time frame we set out to create all of the custom features that make this store unique and celebrate the qualities of the Palace Skateboard brand. We were not only able to carve the large sundial fountain and wall hanging water features, to create numerous mosaics, to mold the giant dome, fabricate the custom furniture, but we were able to accomplish this across multiple states and four countries, including France, Italy, Lebanon, and the United States. Palace partners and all of their team were a complete joy to work with, always up to stretch and look at new directions, unafraid of the challenges, and absolutely determined for materials to be “real”.

Read more about this project in our News & Blog. 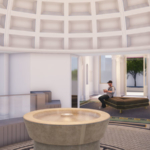 Commercial Space on Melrose in Development

Kurt Krueger Architects is working on a new commercial retail project on Melrose. We

Here’s a fun promotional video created by Palace about their new store. 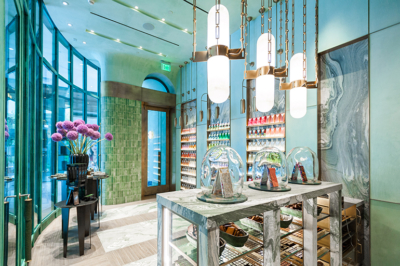