What You Need to Know About SB9 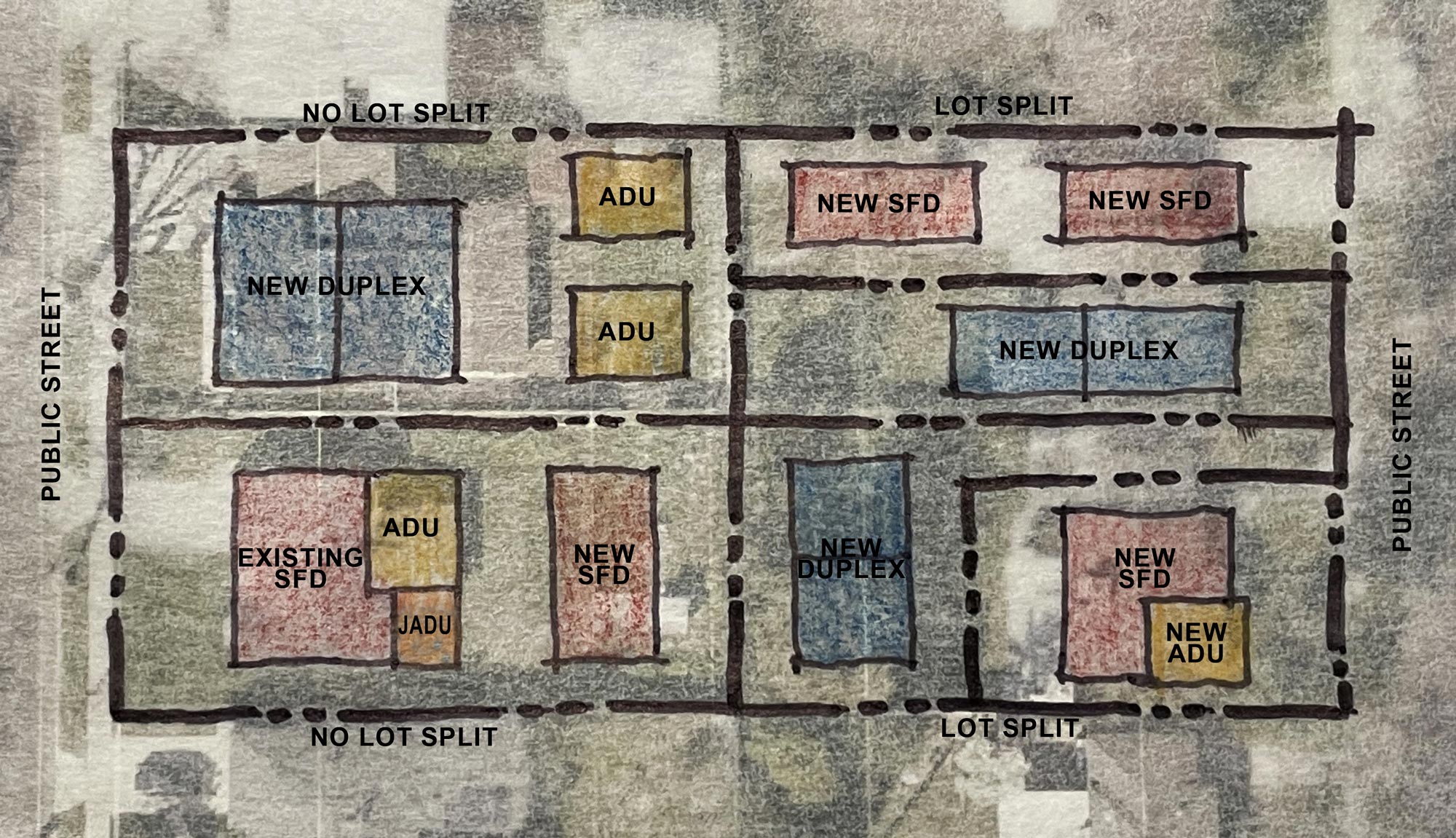 Senate Bill 9 (SB9), also called the California Housing Opportunity and More Efficiency (“HOME”) Act was signed into law on September 16, 2021, and went into effect statewide on January 1, 2022. Also referred to as the “duplex bill,” SB 9 allows homeowners in urban areas to split their single-family residential lot into two separate buildable lots, called Urban Split Lots. Pairing SB9 with the 2017 legislation that legalized accessory dwelling units (ADUs) and the 2020 rules changes for ADUs, homeowners can now build up to four residential units on their once classified single-family lot.

The legislation is “aimed at streamlining housing permitting and increasing density to create more inclusive and vibrant neighborhoods across the State.” The Public Policy Institute of California estimates that 3.5 million additional housing units are needed in California by 2025 to meet the projected demand. Currently, fewer than 80,000 new homes are built each year. Considering that 75% of all developed land in California is zoned as single-family, this legislation has the potential to greatly expand the amount and type of housing units available in the state. Developed property could be used for purposes including building additional housing for multi-generational living with aging relatives or adult children or creating new rental properties for financial gain from long-term rental income.

Proponents of the bill believe that SB9 will alleviate the persistent shortage of housing, particularly in areas like Los Angeles. Shortages are thought to cause increases in home prices; increases in rental costs; cause displacement throughout the state; push the boundaries of urban expansion outward, increasing sprawl; and cause residents to leave the state all together. Supporters believe SB9 ultimately puts more control in homeowners hands, not real estate developers, to determine the character of their neighborhoods.

Opponents of the legislation believe it increases density and puts pressure on dilapidated infrastructure and social services that are already stretched thin. They believe it changes the character of their neighborhoods and affects quality of life by increasing traffic and noise. They also believe it’s an overreach of government to take these local-level decisions and give blanket approval at the ministerial level without regard to the impact. Local governments are only allowed to impose their specific design standards and limitations if they do not directly conflict with the statewide law.

How Does SB9 Work?

All single-family property owners are permitted to split their lots. They can either sell the other half or build out the entire property. Duplex units are permitted and depending on the local ordinance, up to two ADUs can be added to each lot for a maximum of four dwelling units. Four total, if the lot is not split, or up to two units on each split lot. The units can be in combinations such as:

Homeowners who split their property and develop it must commit to occupying one of the units, as their primary residence, for a minimum of three years. All of the other dwellings can then be rented.

SB 9 was created to encourage housing development in urban environments while protecting vulnerable populations and ecological areas. Therefore, a property must be located within an urban area and zoned for single-family use to be eligible. A property cannot be located within a fire hazard zone, flood zone, historic zone, prime farmland, or within other environmentally protected areas. In addition, proposed projects cannot require the alteration or demolition of rent-controlled or moderate, low, or very low-income housing. Alteration and demolition are also prohibited for any units occupied by a rental tenant within the past three years. Financing and local ADU permits may be obstacles to the implementation of SB9.

Is the idea of the “California Dream” of owning a single-family home with a large private backyard obtainable or will you be sharing the space with three other units? While the extent of SB 9’s impact remains to be seen, the new law does attempt to create options for homeowners and their communities for addressing the housing crisis.